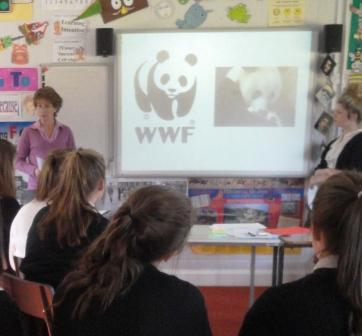 Should we fight to save the panda?

Clipboard in hand, Westholme’s  Head of Biology, Miss Incerti spoke lucidly concerning the scientific inevitability that pandas would die out if left to their own devices since female pandas have a fertility window of only two days a year; only nurture one cub no matter how many are born and don’t maintain a sustainable diet.   Megan Smart ably supported Miss Incerti, explaining extinction as a natural part of species evolution.

Then it was our Head of Geography, Mrs Buckley and Megan Rippingale’s turn: armed with a powerpoint incorporating two particularly cute panda twins and cunningly left running with the ”˜pandacam’ from San Diego Zoo, they retaliated fiercely that pandas have been on the planet for over two million years denying us the right to ”˜play God’.   Saving one panda, they argued can also save many other endangered species which inhabit their territory such as the dwarf blue sheep and the ibis.   Furthermore, the panda is an important symbol of friendship and peace in China, encouraging the Chinese towards environmental awareness.

The debate raged with our girls joining in to give their views vociferously, most notably Gabrielle Lamoury and Charlotte Jackson.

Despite labelling the notion of ”˜panda loving’ due to their ”˜cute, cuddly appearance’, ”˜ignorant’, Miss Incerti remains friends with Mrs Buckley who, in turn, has been forgiven for bringing her hand down on the desk with an emphatic ”˜no!’ in the face of Miss Incerti’s argument that an  artificial insemination  programme would fail to make panda bears sustain themselves in the long term.

The bell rang too soon but Chairperson, Isabelle Turner brought the debate to a close with 18 votes to 8 in favour of saving the panda.

Thank you to all concerned and we look forward to our next Big Debate.