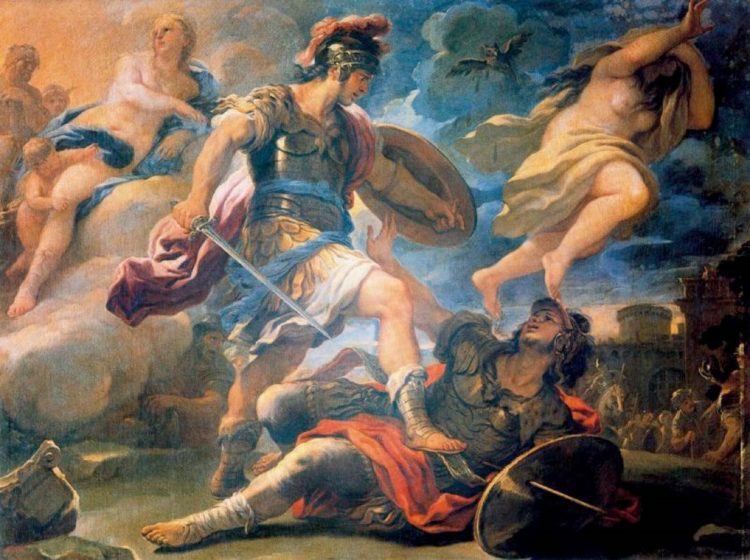 Written by Mr Oracz – Head of Sixth Form and Classics

This week in Classics, Sixth Form students have been on an emotional rollercoaster as they analysed the historic works of the Greek playwright, Sophocles, and the epic poet, Virgil. The backbone of Classics at A Level is mythology and both year groups have been fortunate enough to develop their knowledge of both Greek and Roman myth through the differing styles of Greek Tragic Theatre and Roman Epic Poetry.

This week, we finished the most famous of all Greek Tragic plays, “Oedipus the King”. For those of you who already know the myth or are familiar with Sigmund Freud’s unique theory based on the human psyche, you will understand me when I say how dramatic this week’s lessons have been. The legendary king of Thebes, who famously saves his people from the Sphinx (a woman-lion hybrid monster that devours its victims when they fail to solve its riddle), finally succumbs to his pre-ordained fate. With his city and people suffering because of a terrible plague, all eyes turn to their leader for guidance, only to turn away from him when things begin to go wrong. One cannot fail to see the modern parallels with this narrative, as we have all looked to those in authority in this country to help us during the pandemic. Finding modern parallels in ancient myth is not an unusual task for Classicists; in order for us to learn about the future and make progress as humankind, we must look to the past for answers and seek to better ourselves based upon our heritage and culture, something students thoroughly enjoy doing in lessons.

In Year 13, students have been following the heroic challenges faced by Aeneas, the legendary founder of the Roman race. After their defeat by the Greeks, he is faced with the task of leading the surviving Trojans to find a new civilization across the seas. Aeneas encounters many challenges along the way, whilst constantly being thwarted by the jealous queen of the gods, Juno. This week we have seen Aeneas unleash himself in battle upon the armies of his savage enemy Turnus. He is like a one-man army, single-handedly breaking the ranks of the enemy and defeating all in his path. In a story of heroism, tragedy, victory and despair, will Aeneas give-in to his fury and allow himself to succumb to the shameful actions of a tyrannical king, or will he fight with honour and show respect to his enemies, despite feeling extreme pain and grief at the loss of his loved ones? Classics students have been working through book 10 of the poem and developing their understanding of the characters, themes and narrative styles of the 2000-year-old poem.

In Classics, students study these ancient stories in translation, allowing them to fully immerse themselves in the world of gods, monsters, heroes and villains. Some of the world’s most famous modern stories derive from these ancient myths, including J K  Rowling’s ‘Harry Potter’ series, the entire world of Middle Earth in ‘The Lord of the Rings’ by J R R Tolkien, and even more recently the ‘Percy Jackson’ series by Rick Riordan. Whatever your taste is in the modern fantasy genre, I fully encourage you to sample one of the originals from the ancient world and join our Sixth Form students in enjoying the world where great story-telling began.