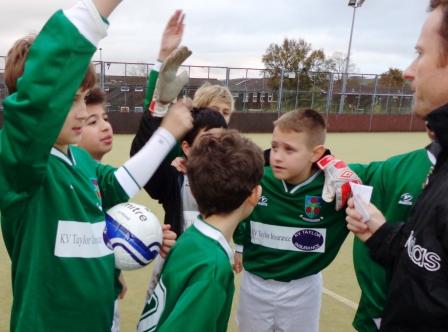 Westholme’s Senior Boys played a football match against St Wilfrid’s on Thursday 8th November.  I was put in mind of the leader of the A Team, John ”˜Hannibal’ Smith’s favourite celebratory phrase of “I love it when a plan comes together”!   The boys were well organised and disciplined in maintaining their positional play and cleverly moved themselves around the pitch in response to the unfolding match. Indeed, Westholme pressure soon brought an opening goal by Suresh from a seemingly impossible angle, quickly cancelled out by a well hit St Wilfrid’s strike.   Max Benedetto then began what can only be described as a reign of brilliance as gaps appeared in the opposition’s midfield and defence.   Max’s first goal put Westholme in the lead again but another quick response threatened to frustrate our boys.   However, Max’s second, third and fourth goal put the result of the game beyond all doubt.   The young striker played a blinder as did both our goalkeepers, Umar Patel and Ben Tinniswood, who played one half each.   Westholme’s sixth goal in the final minute was a well earned and fully deserved strike by Umar Akhtar.

Mr Kevin Gallacher, Westholme’s football professional, found it impossible to select a Man of the Match, preferring to praise all the boys for their outstanding teamwork.