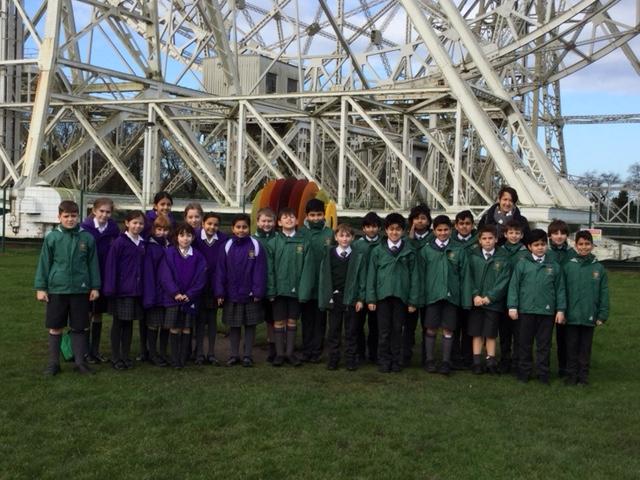 Brilliant, brain-boggling and the best day!” Just some of the words used to describe the Year 5 trip to Jodrell Bank on Wednesday 15th January.

The visit began in the Space Pavilion which gave the children a chance to explore the wonders of the universe, listen to the sound of the Big Bang and to observe what happens when an object spins into the path of a black hole.

Next, back out in the winter sunshine, Year 5 walked the Telescope Path beneath the 76 metre wide Lovell Telescope and enjoyed sending messages to each other via the whispering dishes. The children watched in awe as the huge telescope rotated before their eyes. An impressive sight!

A definite highlight of the day was the inflatable planetarium inside which Year 5 learnt all about constellations and their names, the power of the sun and the other trillions on stars in the universe. Their reaction to experiencing the sky at night was priceless and their enthusiasm was just magical! The children were also fascinated to find out about the Orion Nebula and the Spirograph Nebula, and they were given an opportunity to ask the planetarium guide some probing questions too.

Finally, Year 5 took part in a superb rotation of experiments in a solar system science workshop where the children worked in groups on four different investigations. These included finding out about how the brightness of the sun’s light changes as we get further from the sun, investigating the properties of a variety of rocks to identify the meteorite, and a simulation which involved testing a selection of soils taken from different areas of the planet, Mars, for their acidity. The children proved themselves to be super scientists and excellent team players as they took it in turns to complete the tasks and record their results.

Our trip to Jodrell Bank was the perfect introduction to the children’s new science topic all about space and it may just have inspired them all to look up into the sky a little more and to share their knowledge about our mysterious and incredible solar system.