Year 7 students set themselves a challenge to swim the distance of the English Channel in our very own swimming pool here at Senior School, to raise money for Sport Relief 2020. This is what happened…

On 2nd August 2003, two teams of six Westholmers set off from Folkestone in the dark early hours of the morning, determined to swim the English Channel. The students aged between 13-18 years old (who had trained for this for two years) took it in turns to swim for an hour before being replaced with the next swimmer. There were strict rules in place including swimmers only being allowed to wear one swimming hat, one standard costume (definitely no wetsuits!) and one pair of racing goggles. Lathered in lard and totally exhausted after fighting with the tides and dodging shipping vessels, the Junior team made it to France in 12 hours 10 minutes and the Senior team in 12 hours 33 minutes. 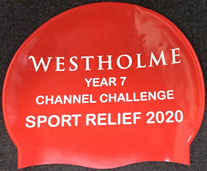 Not quite under the same conditions, but definitely with a similar amount of tenacity, our current Year 7s have undertaken the challenge to swim the equivalent number of lengths to cross the English Channel in our very own heated swimming pool in a bid to raise money for Sport Relief.    They were given a strict time limit of just over an hour to complete as many lengths as possible and began their challenge on Monday 2nd March.  We hoped we had set what was a realistic and achievable distance but had completely underestimated the determination and grit of this group of students.  By the end of the girl’s first sessions, half the year group had already swum the 34km distance between just the 25 of them!  It seemed that Year 7 were determined to tackle this challenge with same commitment to excellence that we have witnessed in other aspects of their approach to school life.    In their PE lessons, the boys also swam a collective distance of just under 34km and then the latter half of the girls, not wanting to be any different, matched them.  Not ones to be left out, the Year 7 tutor team, PE staff and Mrs Kenealy and Mrs Green also donned their swimming kits and swam a collective 3km whilst being cheered on by the students in their Channel Challenge swimming caps, who took great delight in seeing that staff were not exempt from the challenge they had set them.

It has been amazing to see the teamwork, resilience and enthusiasm that Year 7 have demonstrated towards the challenge over the past two weeks and we are all very proud of their efforts.  What’s more we are extremely proud of the money that they have raised for Sport Relief through the generous support of their family and friends – thank you to all of you who have donated and supported Year 7 and this endeavour.  To date, the total amount raised for Sport Relief is over £1500 which will go a long way to helping support individuals and families who face their own challenging situations or circumstances.