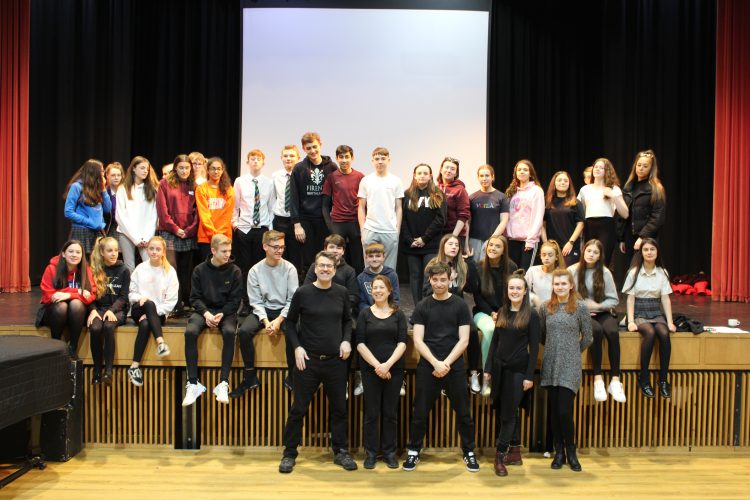 On Tuesday, all students in Year 9 and students who take GCSE and A Level Drama watched ‘Hard to Swallow’ by Mark Wheeller, the GCSE set text.

The play was performed by ‘Tie It Up’: a theatre company who worked closely with the playwright to produce this emotionally moving and incredibly pertinent performance. Set in the 1970s and 80s, the play charts the life of Catherine Dunbar, a girl diagnosed with anorexia during her teenage years. Despite numerous readmissions to hospital, Catherine’s problem can not be resolved by feeding schedules alone; the play highlights the issue with understanding mental health and the lack of attempts to explore the complex psychological causes of anorexia. Whilst the effects of Catherine’s illness are explored extensively through her role, the impacts of anorexia on her family are also deeply felt. The performers adeptly conveyed the harrowing array of emotions experienced by the family, wavering from hopeful optimism that she may get better to detached despair that her fate is, inevitably, death. The students found the performance extremely moving and incredibly important in terms of understanding how anorexia, broadened to mental health in general, impacts not only the individual but also their close family and friends.

Following the performance, the actors provided a workshop based on the themes and issues of Hard to Swallow. In groups, the students discussed how various factors contributed to their understanding of the core issues of the play before producing freeze-frames and unscripted scenes in connection to the text.

It was a play that, whilst in no way flashy in terms of technology and set, spoke to the audience with an emotional resonance deeply felt by all that the traumas of anorexia are real and profoundly impactful on both an individual and family level.