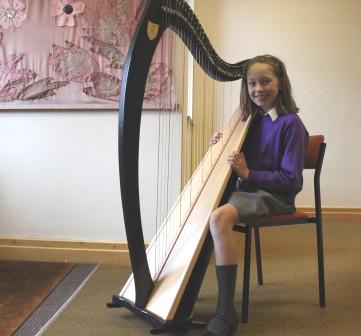 Budding musical maestro, Matilda Prescott-Jones  (4S)  has been raising the roof with her skill on the harp.

At the tender age of nine, and just six months after learning to play the celestial instrument, she has been wooing audiences and judges with her talents. Matilda started playing the harp back in September simply because she had the opportunity to learn it at Beardwood Bank.

Matilda swept the board at the recent Penwortham Music Festival, when she became the first harpist at the prestigious event in more than two decades.

She has played the piano for a couple of years and and entered the music festival last year.   This year, Matilda decided to enter with both piano and harp and won the piano and string sections.   She got a distinction for both of them and won the Music Cellar trophy for the highest mark.

Already an accomplished pianist, Matilda is preparing for her grade three exams after just a year and a half of tinkling the ivories and besides her harp classes in school has regular private piano lessons.

Penwortham Music Festival director Philip Walsh was amazed by the youngsters’ performance and said: “This was one of the highlights of the festival as it was the first time in 21 years we have had a harp.”