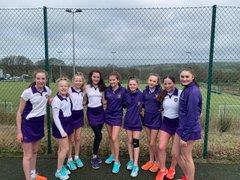 Saturday was an exciting day for the junior school…it was our first Saturday fixture for the netball teams and the first netball game for our many of our year 4s.

The courts were jam packed with teams from Westholme and Scarisbrick with all year groups between year 4 and year 10. The atmosphere was electric and the girls were ready and raring for their games. The teams played next to each other on the netball courts and every direction you looked you could see the girls working hard as a team to dodge the opposition and score goals. The year 6 team faced some very tough competition and worked hard to try and overcome the strong attacking setup from Scarisbrick. Westholme were able to maintain possession of the ball for long periods with some excellent play demonstrated through their passing and dodging. The final score was Westholme 4, Scarisbrick 42.

The year 4 and year 5 game was a heart warming example of working together and learning through doing. For the year 4s this was their first competitive game of netball that they have taken part in. We have spent a long time in lessons building up to playing netball matches and the game on Saturday was a clear demonstration of how much they have learn and how well they have developed since September. The girls took on the challenge of a well practised team and were quick to pick up some of the techniques being used by the other school and use them too.

They showed some excellent movement into space and not going out of their set areas. We also had some fantastic goals to celebrate! The final score was Westholme 3, Scarisbrick 8. We’re very proud of everyone who took part on Saturday for representing Westholme so well and for showing real determination and teamwork, Well Done!