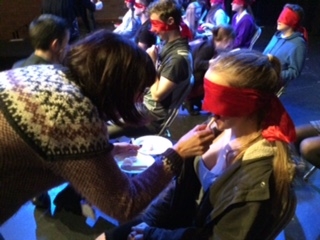 Year 10 students went head-to-head in the Language Department’s annual quiz evening, with students battling it out in teams to gain as many points as possible to gain the coveted prize of becoming the quiz champions for 2016.

Under the glow of the serene lighting in the Croston Theatre, students entered into their battle-ground, which had been transformed into a most suitable atmosphere for them to pit their wits against each other. They enjoyed the friendly rivalry that was always a whisker away, with two teams per table being placed together, filling the entire lower section of the theatre. 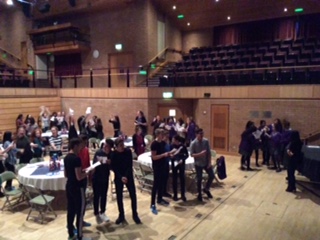 Students were quizzed on the language skills they have been taught in lessons, with the most tactical of teams uniting with other students to cover each of the languages being studied. With questions on each culture, music and foreign films, they covered a range of areas through different mediums, working hard in their teams, allowing each student to give of their best to help their team accumulate points. 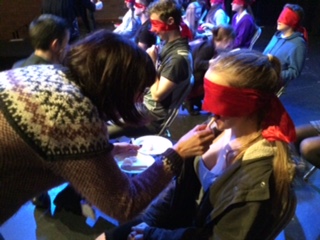 The most dramatic part of the evening came in Round 2, when students had the opportunity to gain a large number of points by performing and singing the Spanish version of One Direction’s “Best Song Ever”. It was clear that some were more prepared than others, as performances ranged from fully choreographed dance routines and congo lines around the theatre, to certain teams going for the more static of performances and praying for the song to come to an end.

Following on from this, each team volunteered a member of their team to be blindfolded on stage and sample three types of food, which they had to then guess what they were eating. With the fear of what repulsive tastes they might encounter, the most courageous of students put themselves in harm’s way for the good of their teams and bravely took to the stage. Fortunately, no one found any of the food too distasteful, with the volunteer from the team that would go on to win the competition actually guessing all three foods correctly. 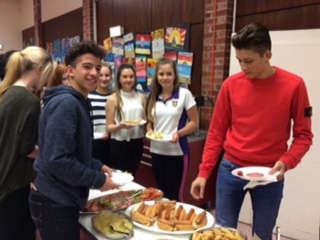 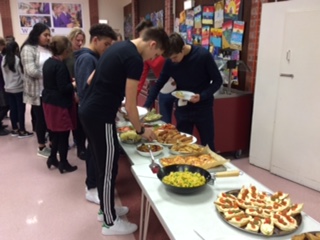 Following a delectable buffet of continental foods kindly put on by Mrs Ballan and the school kitchen, the evening came to a finish and the marks were counted. The final result was incredibly close, with the top three teams being within 5 points of each other. The team named “We Will Bribe” unfortunately did not live up to their name and, as a result, fell well short of the mark. 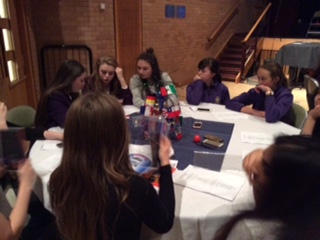 However, the end results were as follows:
In third place were “The Silent Linguists”, who maybe should have been “more vocal” in the song, with 81 points.
In second place were the “Elemonators”, who at this point I will have to “eliminate” from the race, with 83 and a half points.
The winners, and champions of the Languages Quiz 2016 were “mors est non finis” (whose philosophical name translates in Latin as “death is not the end”), with 85 and a half points. 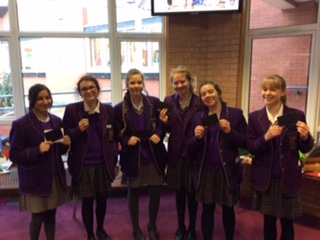 Let’s see if our current Year 9 students will be able to top these scores in the 2017 quiz!

Special thanks to Mr Oracz who kindly wrote this article. Mr Oracz would like to thank all students for taking part, the catering department for putting on such a wondering buffet, Mr Scott for his technical assistance throughout the entire event, and all the members of staff from the Languages Department, Mrs Moore, Miss Collins and the Language Assistants for their help.