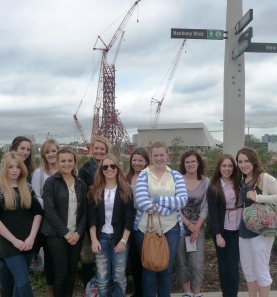 The A level Geographers made an early start for their trip to London on Saturday 25th June. They began their southern foray by exploring one of the poorest parts of the country, the London borough of Newham. This deprived area, with its high unemployment and social problems, has been scarred by pollution and dereliction since the decline of the London Docks.

The tour took them to the Olympic site and from the viewing platform they surveyed the development. At a cost of 9.3 billion, will the legacy of the London Olympics result in the long-term regeneration of this multicultural area? Will the ripple effect spread to the people most in need? Or will the investment in the area simply in draw in more affluent professionals? After discussing these important issues the girls headed west to Covent Garden for some well-earned retail therapy!