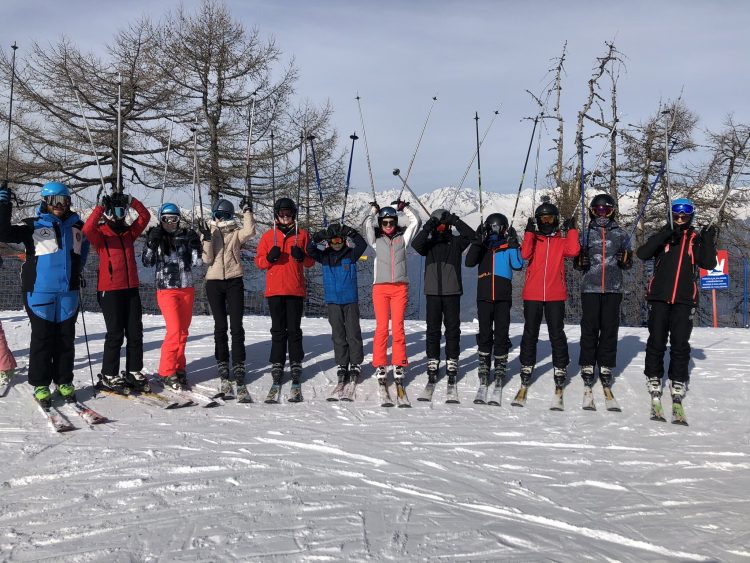 The annual ski trip took place this half term holiday at the Folgarida resort, Italy.

It was an early start for the 90 eager skiers and staff who set off for Folgarida at 2am on Saturday. After a swift flight we landed in Venice to begin a four-hour transfer to the resort. Spirits were high with singing and smiling as the excited students prepared for a thrilling week on the slopes.

The customary ‘ski fit’ session was executed efficiently at the hotel on Saturday evening which allowed all of the students to have a full compliment of equipment ready before Sunday. We had the hotel to ourselves and it was situated right next to a blue run – being able to ski in and ski out every day was a real treat. By the Wednesday even the beginners –who the instructor said were the “best group of beginners [he had] ever had!”- were able to take advantage of the fantastic location. Many students said skiing down to the hotel was the most fun part!

We were blessed with beautiful weather every day apart from Wednesday when a fluttering of snow and heavy cloud cover surprised us all in the afternoon. Students donned their sunglasses at lunchtime and took selfies throughout the day with the epic peaks as their backdrop. Pizzas the size of dustbin lids were a firm favourite with some eating pizza every single day! This gave credence to the saying that you can ‘never have too much of a good thing’.

Within no time at all pupils’ mishaps were being spread like Chinese whispers as people aimed to avoid wearing in the infamous Wally Hat! It was worn with pride by students for things such as: getting temporarily lost, dropping ski poles, and bumping into innocent trees. Even Mr McGarry had a day in the hat for some using French instead of Italian.

The activities were a highlight for many with ice skating proving another opportunity for pupils to show off their talents or learn a new skill. It was impressive to see how so many who had not skated properly before could pick up the basics and were soon whizzing round with their friends. Later in the week a bowling tournament took place with Robbie and Thomas taking the win in their respective competitions. Hopefully their trophies have pride of place in their bedrooms. The annual pizza night was relished after a short walk down into the town. You would think they had had enough pizza but that is clearly not the case! Some students later said they ate pizza the day they got back home! On the final night pupils showed impressive energy levels and threw shapes on the dancefloor at the disco. It would be a late night followed by an early morning for the return journey.

One of Folgarida’s many slopes provided skiers with an opportunity to test their speed with a slalom course. Several groups took it in turns (pun intended!) to see who could be the fastest down the course in the sunshine. This was also a valuable opportunity to film the GCSE PE students, whose competitive edge really helped to eke the most out of every turn. Mr Barnett and Mrs Horner later took the group out to gain a wealth of footage to help in their practical assessments.

As the week drew to a close it was time for everyone to receive their certificates. All of the instructors came to the hotel to present each group with a certificate to show the level they had achieved during the week. Those students who had been on previous trips were able to compare their result with previous years and the year eight students compared their scores eagerly to see who had done well on their first trip.

Each evening staff nominated students whose acts of kindness had been witnessed and appreciated. There were so many instances of courtesy, helping strangers, thinking of others, and looking out for one another that we found it hard to announce them all after dinner. Each person came up to receive a prize amongst a round of applause. It is so pleasing to see how the group becomes a family for that week and how the relationships forged continue back at school. 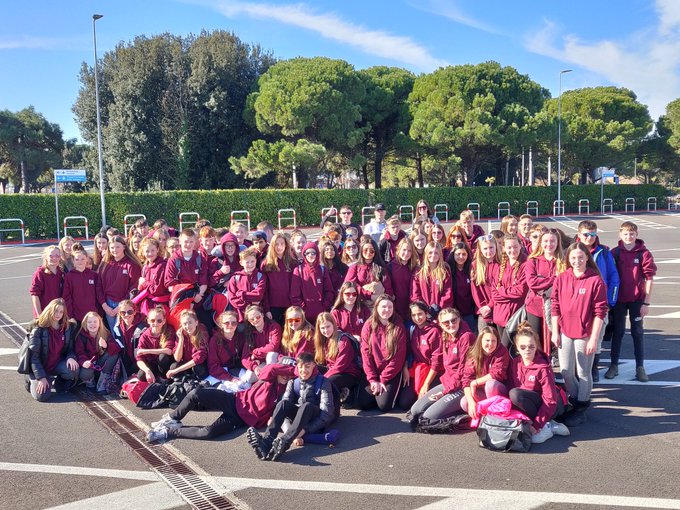 The 3am alarm left many bewildered but we all managed to get back on the coaches within an hour. Many naps and snoozes ensued both on the coach trip to the airport and the plane journey home. Tales of the week were abound as students looked back on what had been a fantastic week. Some thoughts then turned to homework and getting enough sleep to face the half-term to come. It had been the biggest ski group Westholme had ever taken and I know so many are putting their names down for next year!