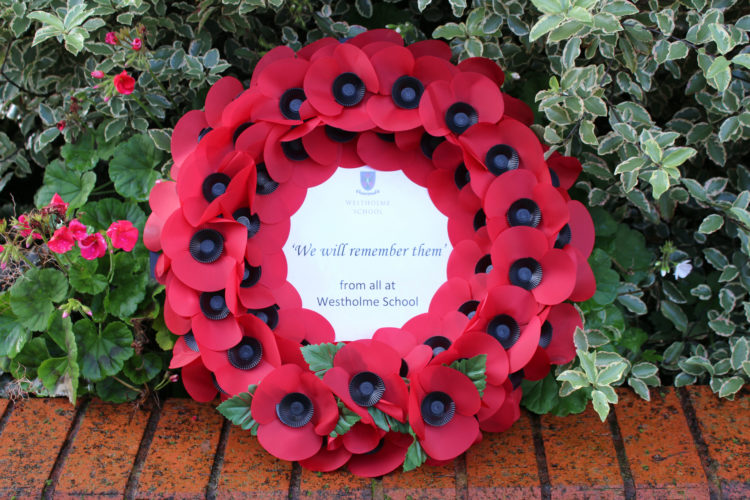 At the Senior School, History teacher, Mr Stewart organised a short video that was played to all students in their lessons at 10:50am which paid tribute to all those that lost their lives in the line of duty since World War I.

Shortly afterwards, at 11am, a whistle sounded on the school tannoy system to indicate the start of the two minutes silence that all students and staff took part in.

After the two minutes silence, Tom in Year 11 played The Last Post on the bugle at the flagpole for all the Westholme family to hear throughout the school.

Children from Years 3 & 4 watched on from the Sports Field, and observed the Remembrance service before they took part in their cross country race across the Senior School grounds.

A poppy wreath was then laid at the flagpole outside Wilmar Lodge by Principal Mrs Horner and Heads of School Yusuf and Nayha.

Afterwards, students paid their respects on what was a beautifully observed and special Remembrance Day.

Students at the Junior School also observed the two minute silence and commemorated Remembrance Day in special assemblies laid on by their teachers.

Earlier on in the week, students at the Infant School had taken part in a poppy competition to raise money for the Royal British Legion – which you can read about here.

We will remember them.