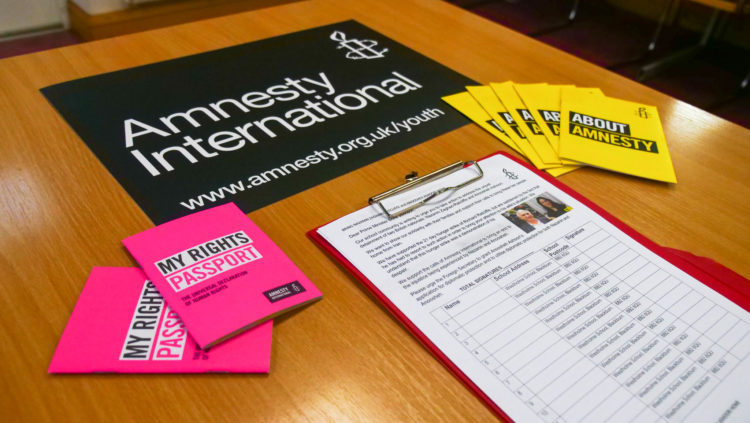 Members of Westholme’s Amnesty Human Rights Group are building a petition to help raise awareness for the release of two British-Iranian nationals held against their will in Iran – both imprisoned in Iran for charges they strongly deny.

Leaders of the Group from the INSPIRED Sixth Form have been following the Nazanin Zaghari- Ratcliffe and Anoosheh Ashoori stories closely, concerned that the government is not doing enough to secure their release. The campaign is being facilitated by Mrs Oracz, Head of Ethics, Philosophy and Religion.

They gave students across the senior school the opportunity to sign the petition in the LRC this Wednesday lunchtime, which is addressed to Boris Johnson. They did fantastically well, engaging pupils to find out more about the issue and encouraged over 380 staff and students to sign up! What an amazing total.

Of the initiative, Principal Dr Robson, said: “It is important that young people feel they have a voice, in addressing issues close to home and within international waters. Westholme’s Amnesty Human Rights Group is an extracurricular activity for sixth form students who are passionate about making a difference and campaigning for positive change.”

Dr Robson added: “Students are delivering a number of educational pieces for the whole school, encouraging pupils and their parents to learn more about the detainees’ stories and sign a petition in partnership with Amnesty International.”

Students could also play a game of snakes and ladders that focussed on the ups and downs of Nazanin’s experience, helping them to understand the injustice she has suffered.

It was great to see so many students involved in the initiative and keen to learn more about the cause – well done to everyone involved.